Sometimes it is impossible to record family stories. Several years ago, I was relaxing with my uncle under a shady tree and asked him to tell me about his experiences during the second world war. He looked at me long and hard, finally shook his head and said, ‘You should not have to live with those images. Never ask me again’. This same uncle when asked a question about the life of his older brother, since passed away, said,’If your father didn’t tell you, then I’m not going to.’

When you get answers like this it is time to forget that you are a writer, forget trying to record stories that may be lost forever and to respect the right of others to own their own stories. However, do write what you can to keep family stories from disappearing.

At the going down of the sun and in the morning, we will remember them 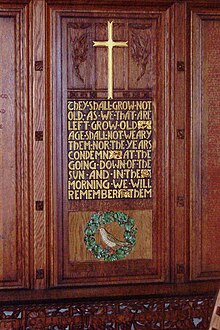 In Australia and New Zealand, as the last post sounds at the dawn services on the 25th April these lines taken from the poem For the Fallen Poem by Laurence Binyon – The GreatWar 1914-1918 are spoken at every ANZAC ceremony. In Australia’s Returned and Services Leagues, and in New Zealand’s numerous RSAs, it is read out nightly at 6 p.m., followed by a minute’s silence.  It is a time of reflection, a promise never to forget those who lost their lives. It is part of my life, my web of memories.  I stood beside my father in front of my mother’s coffin, his military training obvious in the set of his shoulders and his grief stricken, tear-less face. He lived by the saying, what can’t be cured, has to be endured. I will always remember hearing him promise her ‘At he going down of the sun and in the morning, I will remember you.’ They shall not grow old as we grow old. Age shall not weary them or the years condemn

Another story is about Harry (Pop to us) Whitting who served in France during the first world war.  He was one of the fortunate ones to return home. Gassed in the trenches and suffering from malnutrition and an ear infection he was sent back to Australia on a hospital ship. He met Elsie (Ma) at an army hospital. She was a seventeen year old nurse and Harry was presumably eighteen but Pop Whitting lied about his age to enlist in the army. They fell in love, married had five children and celebrated their sixtieth wedding anniversary. He never talked about the war but a large picture of him in cavalry uniform hung in the hall of the rambling home in Edithvale. Aged 86 he was weary and the years had condemned but he was still a jovial cockney lad at heart. However, he no longer looked like the vigorous young man in the photo . A war memorial stands in the centre of a grassed reserve at Beauty Point, where the Patterson River flows into Port Phillip Bay at Carvvrum, Victoria, Australia. I remember when there was a discussion about moving it to some other place so the prime piece of real estate could be developed. The community uproar and disapproval was overwhelming.

Research revealed in 1915 six local firemen went off to war together-but only one returned. In 1921 that man launched a public appeal for the funds for the statue and inscribed base. It was imported from Italy and cost 340 pounds when the average weekly wage was just four pounds a week. Bought with public funds, the ‘Little Soldier’ does not belong to the city of Kingston. He belongs to the people of Carrum and cannot be moved without their consent. Our solitary soldier still stands in pride of place as a mark of respect for those who have lost their lives .

Incensed by the mere thought of moving the monument I decided to write a story from an elderly woman’s point of view.

ANZAC day. The last post has long sounded. The plaintive call lingered in the early morning mist and slowly died as the first flush of dawn lightened the sky. The speeches are over, marchers gone. I bend to touch the delicate blossoms placed at the base of the tall granite column. Blossoms that will soon fade and die. Red roses, bright camellias and a handpicked bunch of hardy daisies that will outlive the others by a mile. How many years have I come to this spot? Too many to remember. Beauty Spot, it is called. An integral part of Carrum, right on the mouth of the Patterson River. A place where mothers bring their toddlers to play and fishermen sit on the low stonewall dreaming of the catch of a lifetime. There is the fresh clean smell of salt and spray: a fitting place to close the eyes and dream of what might have been, to remember the handsome face, coiled puttees, khaki clad faded figure in the ornate frame over the fireplace.

The diamond you slipped on my finger that wintry night in June flashed promise and hope. The dream of manly boots next to my fluffy slippers. A line full of nappies and a cradle to rock. The joy of a family to cook for, a family to love.
That last night we danced and clung to each other before we hurried home to the rented two-roomed flat. The next morning the gate squeaked and I wept into my pillow.

I quietly read the words forever-inscribed in stone. To the imperishable memory of the soldiers of this district that gave their lives… Simple heartfelt words from a grateful community. I am always surprised at his simplicity. This is not an ostentatious crowded statue with flags flying and rifles raised in anger.
Here is one solitary soldier standing upright and alone, hand gripping his rifle barrel, the butt resting on the ground. At ease, but ready and waiting for…, what?

I have never known war, but when I gaze at him I can smell the acrid smoke, hear the whistle of shells and the cries as mates fall. I have lived my life under sunny skies and yet I can identify with his quiet sadness, his overwhelming sense of loss. The telegram read, ‘We regret to inform you that corporal T K Wells VX1068 of the AIF Infantry…’ I thought of planting a tree. At least then there would be something living and growing.

Recently I drove in heated comfort past an Avenue of Honour where row upon military row of silent trees flashed past in the khaki haze of a misty morning. Tall old trees, some over fifty years, planted when young soldiers fell. They no longer stood at the edge of endless paddocks. Ballarat was running out to embrace them, to include them into the teeming life of what is now a city. There were so many trees. Each one a son, daughter or husband and I saw the ghosts of their kin stretching back as far as the horizon. Like a stone in a pond, so may lives caught up, like mine, in the far-reaching circles of the wars to end all wars.

I was shell-shocked for months until it finally seeped into my unwilling brain that you would never again be by my side, your arm around my waist as you kissed everything better. But life goes on and I have known love. Not your love but the worn tartan slippers beside mine in front of the dying fire are comfortable.

I shiver as I gaze up at the long list of names etched into cold stone and run trembling fingers over the rough rock. So many did not survive to witness this new millennium, to drink in the beauty of spring blossoms, or to come here year after year. I gaze up at his strong young face and wonder what he would think of my knotted veined hand pressed against my heart. Time shall not weary them…
The glow in the west bathes him in gold as I sit and dream. And there’s talk about moving him. Some people want a car park, others, townhouses with sweeping bay views. Cart him away to some easily forgotten spot? Over my dead body. I’ll not let them take my soldier. Not this time.

The shrine of remembrance and the eternal flame Melbourne Victoria, Australia