Before we left for the Crocodile Hotel at Jabiru Paul took us to Cousins Lookout and Waterhole. It was not what I was expecting. Lookouts for me meant going to the top of a hill (one tree lookout and tower in the Dandenong ranges comes to mind) and seeing vistas of rolling wooded hills and deep valleys. This lookout was a grassy slope overlooking a billabong.

Cousins Lookout was marked ‘closed’ on the roadworks board at the main turnoff but when we reached the actual road there was nothing to be seen.  We decided to take a chance. I’m so glad we did.

In the early morning light wallabies were everywhere.  I loved seeing those small furry creatures with their joeys in their pouch. It felt like home. Huge termite mounds were everywhere and I just had to take a picture. They reminded me of when we first saw them in 1973. They had not changed and were familiar to us.

We had a resident geko lizard on our ceiling at Mary River Retreat. At night he actively chased bugs and sometimes he came half way down our walls. We loved watching him. I was reminded of the gekos in Malaya. There we always said,  for the first year we sit and watch them. The second year they watch us and the third year we are up there with them. To Alan the ceiling of the unit reminded him of our truck canopy all those years ago.

We arrived back to our unit only to find a family consisting of grandma, grandpa, mum and dad, and four boys had arrived for the Easter holiday. Mum was not happy. she said loudly that the grandparent’s unit was better. “You must have paid more,” was her comment. “Ours smells and has lino on the floor. I’m going to see if I can change.” The children were all scrapping and yelling to go into the pool to escape Mum’s mood and to get away from the heat.

I put on my headphones (a hospital gift from Marian) to drown out the noise and wrote with my apple pencil in my ipad (a gift from Paul last birthday). Fabulous. I could scrawl away in my ipad and not hear a thing. Tomorrow is Good Friday. Tent pegs are hammering, voices calling, the golf buggy hurtles by filled with an adult driving and laughing children and the water spray is tut, tut, tutting. They are happy campers preparing for the Easter holiday but the peace without the headphones has gone. Tomorrow we are happy to move on to Kakadu.

To help me understand more about our destination I searched for information about Kakadu on the internet. This is what I discovered.

The name Kakadu may come from the mispronunciation of Gaagudju, which is the name of an Aboriginal language spoken in the northern part of the park. This name may derive from the Indonesian word kakatuwah, (via Dutch kaketoe and German Kakadu) subsequently Anglicised as “cockatoo”.

Kakadu National Park is a protected area in the Northern Territory of Australia, 171 km southeast of Darwin. The park is located within the Alligator Rivers Region of the Northern Territory. It covers an area of 19,804 kms (7,646 sq mi), extending nearly 200 kilometres from north to south and over 100 kilometres from east to west. It is the size of Slovenia, about one-third the size of Tasmania, and nearly half the size of Switzerland. The Ranger Uranium Mine, one of the most productive uranium mines in the world, is surrounded by the park.

Our accommodation at The Crocodile Hotel was superb. Our unit was large, comfortable and right beside their swimming pool. The dining room was close by. We had several meals at the hotel restaurant. On the first occasion I had barramundi fish and it was superb, as were all our meals. When I mentioned this at reception the comment was, ‘Our chef knows he is good, but I’ll pass on your compliments anyway’. The lovely young waitress was a new French backpacker who had just arrived and was learning the language and the craft. Our room was just behind the head of the crocodile hotel in the picture below. You can just see the shade sail over the swimming pool. In the heat it was lovely to go for a swim in cool water before showering and heading off for dinner.

Kakadu is indigenous owned and we were very aware of and respectful of their culture. Paul and Marian took us to view the rock paintings at Ubirr, a group of rock outcrops in the northeast of the park, on the edge of the Nadab floodplain. There are several large rock overhangs that would have provided excellent shelter to Aboriginal people over thousands of years. Ubirr’s proximity to the East Alligator River and Nadab floodplains means that food would have been abundant and this is reflected in much of the rock art there. Animals depicted in the main gallery include barramundi, catfish, mullet, goanna, snake-necked turtle, pig-nosed turtle, rock-haunting ringtail possum and wallaby, 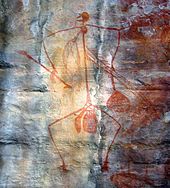 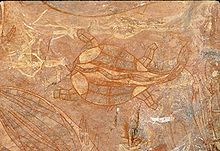 Paul pushed Alan in his wheelchair in 35 Celsius heat and made sure Alan saw as many paintings as possible. Paul also ensured Alan saw a remarkable variety and concentration of wildlife by stopping at every bird-hide and shelter along the way. He was so professional in the way he unfolded the wheelchair from the back of the four wheel drive car and had it ready for Alan to use. Apart from the heat, most places were wheel chair friendly. However, when the pathway gave way to gravel it was an uphill battle.

Burrunguy, formally called Nourlangie Rock, is located in an outlying formation of the Arnhem Land Escarpment. There are a number of shelters in amongst this large outcrop linked by paths and stairways. The shelters contain several impressive paintings that deal with creation ancestors. Some of the stories connected to these artworks are known only to certain Aboriginal people and remain secret. Anbangbang Billabong lies in the shadow of Nourlangie Rock and is inhabited by a wide range of wildlife which would have sustained traditional Aboriginal people well. We had many picnic lunches and loved the peace of this place. I took many photos of information to read at my leisure. 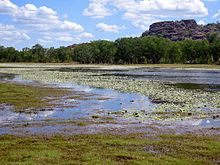 From the Jabiru airport we took a kakadu Air one hour scenic flight. I wanted to get an idea of the size and shape of the land and you can only do that from a small plane or helicopter.

The vast expanse of Kakadu lay spread out before us.  I saw the flood plains below and the high escarpment rising out of the mist. It would have provided shelter for centuries from violent storms, flood plains and billabongs during the wet season. I imagined aboriginal people sheltered by rock cliffs towering above. Imagined them waiting patiently for the monsoon to pass and the dry season to begin. They would huddle around fires, gossiping, story telling and adding to the art work. An abundance of wildlife would have kept them healthy and alert. The commentary through the headphones was informative and fascinating. There was so much to learn and to see and I was spell bound by the sheer size of the area.

Jim Jim falls were fascinating from the plane and we were given every opportunity to see them. I’d noticed on one of our car trips that the road to them was still closed. We decided not to try to get through this time. However  viewing them from the air was amazing.

How generous of the indigenous people, now that they own most of Kakadu to welcome all people to their country. However, certain areas are closed to everyone, indigenous people included, because that area is the resting place of the Rainbow Serpent and she must not be disturbed.