How do you accidentally buy a Paris apartment? 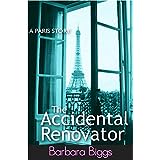 This is a smart, snazzy, witty story set in the romantic city of Paris. As I expected, I am really enjoying reading Barbara Biggs’ latest book The Accidental Renovator. It is a sassy, ironic, exuberant book that holds your interest from start to finish. Smart, funny and written about the real world in a way that will make you sit up and take notice.

Barbara Biggs is also author of In Moral Danger, The Road Home and Chat Room. At 14 Barbara’s grandmother sold her to a pedophile; at 16 she was in a psyche hospital; at 18 she was a prostitute in Japan; at 19 she escaped Cambodia weeks before it fell to the Khmer Rouge; at 21 she caused national headlines and received death threats; at 30 she became a journalist. By 40 Barbara was a property millionaire. Just imagine her life in the years following. So how did Aussie Barb end up writing about renovating an apartment in Paris? Incorrigible romantic, writer and renovator Barbara Biggs thought she knew about sex and real estate. Then she went to Paris. The self-described ‘foot-in-mouth Aussie chick’ can’t help ‘just looking’ at apartments for sale. Big mistake. She speaks little French, knows no one in Paris and has never thought of living there. But when the agent assures her the owner will insist on the asking price, she makes a low offer ‘just for fun’. It is accepted—and her life goes haywire. Biggs smuggles in a handsome Australian builder to renovate the apartment.
But he doesn’t speak French, doesn’t have any tools, and when the budding romance goes sour he vanishes and Barbara’s dream renovation becomes a nightmare. Undeterred, she joins the Lazy Pigs Millionaires’ Club and is soon lunching in grand chateaux, partying until dawn and learning about continental men in the nicest possible way. Then she writes about it.

Imagine my surprise on reading the fist page of The Accidental Renovator to see, ‘I’d come to visit my French friend Lucy in Nancy, a university town three hours east of Paris.’ I was immediately back in Novel Writing Class, along with Barb and Lucy Mushita in the Professional Writing and Editing Course at Holmesglen TAFE. At that time Barb  was busy writing  In Moral Danger. Later, Lucy published her novel Chinongwa and I launched Pickle to Pie.

Biggs’ first book was a 2003 autobiography about her life up to the age of 22. The book tells of her sexual abuse from the age of 14 by a well-known criminal barrister. It explains the damaging after effects following her abuse, including time spent in a psychiatric hospital, escaping Cambodia weeks before it fell to the Khmer Rouge and being a prostitute in Japan. It also describes how she attempted suicide four times, received death threats and caused national headlines – all before the age of 22.

The Accidental Renovator shows how far Barb has come, not only in her life but as a writer. Both Lucy and I wish Barb good health, joy and every success.

The edge of the World
November 9, 2015
Erika Madden: Year of The Angels and Cries From The Fifth Floor
August 31, 2015
Writing from Mourning
May 18, 2015
© Copyright Glenice Whitting - Website by Webcare